Crafting an idea of artful living

While flipping through pages of glossy magazines, it is difficult for a person to stop oneself from craving over the opulence found in the pages. The intricacy of design, the development of an idea and the understanding of architectural complexity doesn’t come easily to everyone. Real estate visionary Robbie Antonio has that rare quality to bring the best of all worlds through his ability to blend such diverse concepts into an idea of aspirational living. He brings concepts of luxurious living, art, flexible spaces, accessible pricing and liveable places through his latest endeavors or as he likes to describe, a beautiful obsession – “REVOLUTION PRECRAFTED”. His ambitions are simple yet revolutionary, an idea to bring “Democratic Design” in real estate

REVOLUTION PRECRAFTED is an idea to bring “Democratic Design” in real estate.

Robbie is one of the youngest and most prolific collectors of international modern and post-war contemporary art in the world. Because of his accomplishments as an art collector, he has received a number of awards from a number of recognized organizations. In 2014, Artnet recognized him as one of ‘20 of the World’s Most Innovative Art Collectors’, while in 2015 and 2016, he became part of Artnet’s ‘Top 200 Art Collectors Worldwide’. Artnet also recognized him with two awards in 2016: as one of the ‘Twelve young art collectors to watch out for’, as well as one of the ‘Top 100 art collectors’ for that year. This year, he was cited by BuiltWorlds in its 2018 Mavericks Report as one of ‘25 Pioneers Who’ve Transformed the Built Industry’, while in May 2018, he was named ‘Real Estate Personality of the Year’ by PropertyGuru.
His passion for art has also led him to collaborate with artists such as Marina Abramovich, Maurizio Catellan, Francesco Clemente, Damien Hirst, Zhang Huan, David La Chapelle, Marilyn Minter, Takashi Murakami, Julian Opie, and Julian Schnabel. To date, he has worked with 13 Pritzker Prize Architects/Firms such as Zaha Hadid, Philip Johnson Alan Ritchie, Rem Koolhaas, Jean Nouvel, I.M. Pei, Paulo Mendes da Rocha, and Christian de Portzamparc to name a few, as well as designers such as Ron Arad, Campana Brothers, Tom Dixon, Philippe Starck, and Marcel Wanders.

“I always want to work with the best people in the world, whether it is business, politics, art… because that makes you a better person,” he emphasizes. “You learn from the best and it’s a privilege. I want to impart that to the world.”

I always want to work with the best people in the world, whether it is business, politics, art… because that makes you a better person. You learn from the best and it’s a privilege. I want to impart that to the world.”

Robbie is the Managing Director of Century Properties, responsible for establishing the largest number of luxury branded real estate developments around the world, such as the Milano Residences by Versace, Acqua Livingstone by Missoni Home, Azure by Paris Hilton, Forbes Media Tower, Armani for Century Spire and the Trump Tower.

“I’ve already done the luxury projects and people know me for that, but I’m going to do something inherently very different,” he adds. “If I can do something extremely benevolent in society in an ignored niche, why not?”
“Honestly, in business, passion is not even enough. OBSESSION is key,” Antonio currently has 82 million square feet worth of developed, in-progress, and managed properties under his belt, him being the Founder and President of Antonio Development in New York, Managing Director of Century Properties based in Asia, and now the Founder and CEO of Revolution Precrafted. Revolution Precrafted is his one and only focus.
He is taking his passion to next level by bringing together over 80 of the world’s leading architects, artists, and designers including Sou Fujimoto, David Salle and celebrities such as Daphne Guinness, Helena Christensen & Camilla Stærk and Amar’e Stoudemire. His efforts have earned him accolades such as the ‘2018 Philippines Real Estate Personality of the Year award’, ‘25 Mavericks who help transform the built industry’ by BuiltWorlds, ‘50 Asians who are changing the way we live’ by the Singapore Straits Times, ‘25 Most Influential Personalities’ by the Philippine Star, ‘50 Under 50’ by Town & Country, ‘Real Estate All Stars in New York’ by Real Estate Weekly, New York, ‘Top 40 Rising Stars of Real Estate Globally’ by Institutional Investor Magazine by the age of 28 and not to mention he climbed quickly to ‘25th on Forbes list of the Philippines 50 Richest 2018’ while being ‘28th on Forbes list of the Philippines 50 Richest 2017’ (The youngest person on the list).

I’ve already done the luxury projects and people know me for that, but I’m going to do something inherently very different. 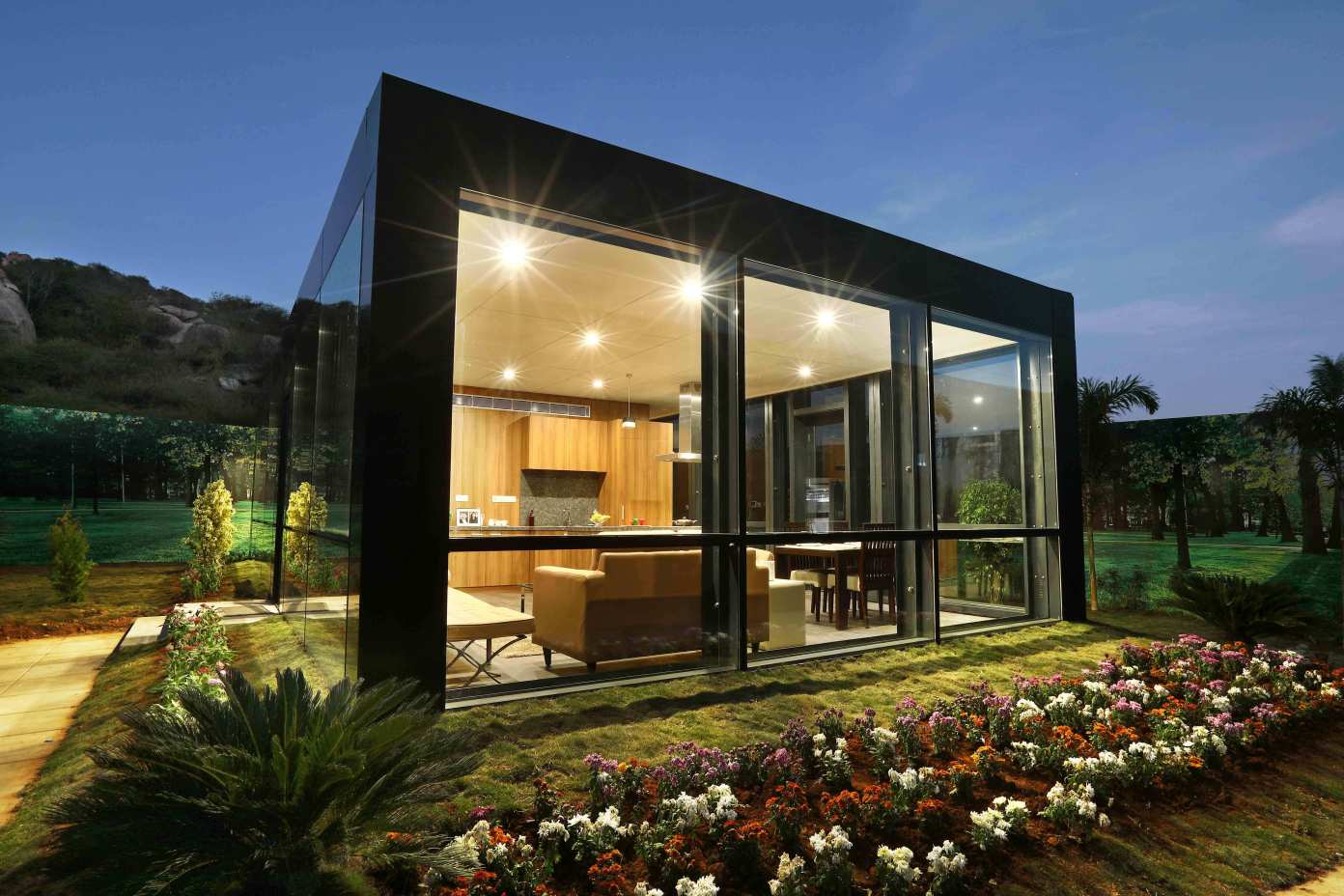 It was in December 2015 when Revolution Precrafted was launched and the company has since become a global supplier of prefabricated homes, pavilions, and other related structures. “I want the homes to be perceived as art pieces. I think this is something that can be built off-site and assembled like a Lego set,” he elaborates. “We’re striving to do something that’s customizable.” he espouses, explaining his idea for a sustainable luxurious living.
To date, Revolution Precrafted has bagged around $8.7 Billion in projected revenues for the company’s ongoing projects in the US, Philippines, Myanmar, United Arab Emirates, Spain, Indonesia, Jamaica, Guyana, Bahamas, Trinidad and Tobago, Puerto Rico, Ecuador, Peru, Nepal, El Salvador, Brazil, Cyprus, Mauritius, Seychelles, India, Indonesia and Japan, Australia, Zimbabwe.
“I’ve worked with 13 Pritzker Prize architects, possibly more than any human being in the world. We have intellectual property over all these names, you can get them at a ridiculously high price and wait a number of years, or get it from us in three months at a much cheaper price,” Antonio explains describing his motivation behind Revolution Precrafted.
The buildings can be customized to the buyer’s specific needs, becoming a private residence cum museums or whatever their clients desire. “We try to customize the buildings depending on the clientele and their needs. Some people want a little private museum but not everyone has the budget of Guggenheim. We provide a flexible space which could take the shape of a library, a performance area, a nightclub or a big restaurant”, elaborated Mr. Antonio.
Among the biggest projects of Revolution Precrafted is the $1.1 billion Batulao Artscapes projects in Batangas province, Philippines, envisioned to be the World’s First Livable Art Park, it features museums and homes that embody the marriage of art, architecture and design. It will have museums designed by Pritzker-winning architects Jean Nouvel, Tange Associates, Christian de Portzamparc and Philip Johnson Alan Ritchie architects. Launched in December 2017, the community will have more than 8,600 homes. Amenities include a sports park, a man-made lake and a flavorpark.
Revolution Precrafted also launched its $750 million Flavorscapes residential project in Central Philippines, which will have 15,000 homes. The community is expected to feature a Museum of Ice Cream, Museum of Candy, Chocolate Gallery, Microbrewery and Beer Garden. The first batch of homes will be delivered by the first quarter of 2018.

Robbie has grand plans for the only Unicorn of the Philippines. His idea can be described as the ‘Ikea of Homes’ for their plug and play simplicity, the “Tesla of Homes” because his work is not just a home but an entire platform of ideas and technologies. Antonio intends to eventually turn the company into a platform for a smart home. A house that can be as intelligent as one wants! He also intends to pre-craft homes for disaster-hit areas which can be erected as quickly as relief camps. The company can easily mass-produce flexible spaces that can be used as per the needs of the situation. The company is on its way of building a “Revolution Community” as intended by its founder. A community where one can enjoy museums, cultural places, and distinctive art without even visiting the actual place.
The prefab industry is expected to grow rapidly in the next 3-7 years and the company is all set on the leaving a global footprint. Revolution Precrafted is in the middle of their global roadshow and hopes to be present in 35 countries by the end of the year. Having greater visibility in 24 countries is already considered a doable target. It has already begun with the opening of Revolution Precrafted’s Dubai office in Q4 2018. By the next year, Revolution Precrafted hopes to be present in 55 countries and 100 countries by end of 2020. Robbie’s ambition is an idea, an idea we think is the world is already waiting for.

I’ve already done the luxury projects and people know me for that, but I’m going to do something inherently very different.